Submit portable freeware that you find here. It helps if you include information like description, extraction instruction, Unicode support, whether it writes to the registry, and so on.
Post Reply
33 posts
Message
Author 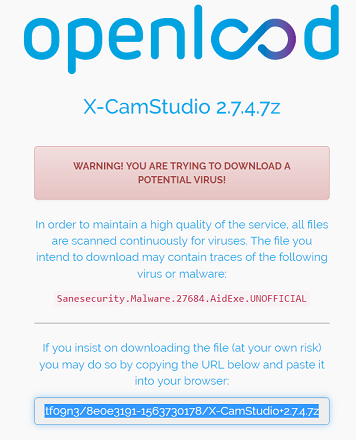 I took the liberty to create mirrors through MirrorCreator.com. Everyone pick your poison:

The current x-Camstudio links work fine. What is this about?

Some further info on the previously mirrored X-CamStudio archive, resulting in an overall score of 11/53.

Upon extraction, it appears to be a modified WinPenPack portable version, with a later version (i.e., v2.7.4) and a smaller footprint than the one currently being offered for download (v2.7.2 rev5):

Upon further checking the main executable ('recorder.exe', the one invoked by the portable launcher), the results came up clean (0/70):

I'm not vouching for this file as there are plenty of other vectors for a malware attack (e.g., the launcher itself -- which, incidentally, is also clean) but, in view of the previous bad results with portable launchers, I fear our response may have been disproportionate.

As I said before, I don't put a lot of stock on similar warnings from free file hosters, which themselves have been know to attempt to trick users into downloading malware. With my previous warning, I was mostly attempting to document the fact, as well as checking if fellow users were getting the same notice.
Top
Post Reply
33 posts